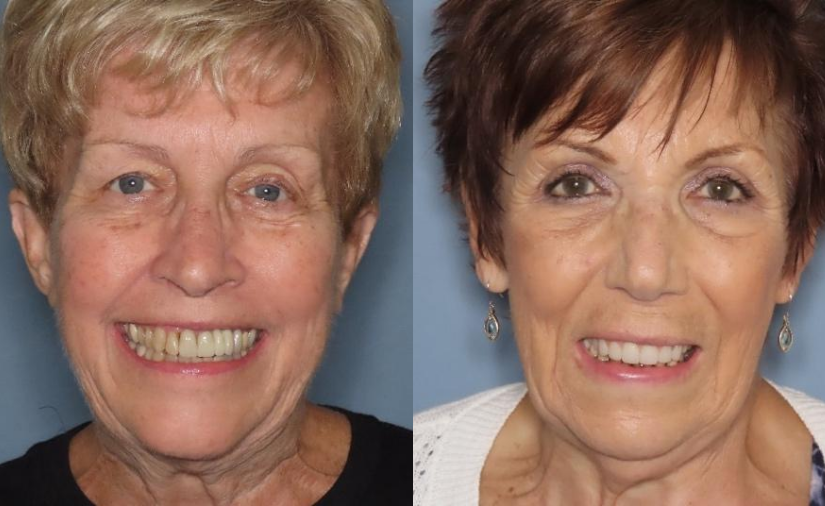 This month we are excited to share two amazing implant stories. We have been waiting patiently for both of these cases to finish over the course of a few years, but it’s been worth the wait. We want to thank Candy and Joan for allowing us to share their stories!

Both Joan and Candy came to us with a history of trying to do the right thing for their dental care, but they had both experienced at least one dental trauma years before. Joan was involved in a motor cycle accident in 1968 where she lost one of her front teeth and started down a path of needing multiple dental interventions. When we started this process with her in 2015, she told us “I hate my teeth. I hate how they aren’t in the right position. I hate how yellow they are. I hate the recession around my bridge. I like to smile, but not the look of my teeth.” She described wanting nicer looking teeth that are strong and allow her to eat without a problem. She wanted the self-confidence that comes with a beautiful smile.

Candy started her journey at age 10 when, unfortunately, she underwent her first tooth trauma, breaking a front tooth. After a series of other injuries and dental treatments done to try to save her teeth, she came to us in 2013 with multiple root canal treated teeth and some teeth that had been replaced by bridges. Candy was very concerned with the recession of her gums and that kept her from smiling too broadly. She also thought that her current dental restorations were too long, she wanted to see them a different shape.

For Joan, there were many teeth we could save, but due to the accident, she had lost a lot of bone supporting the teeth holding an existing bridge and those teeth could no longer be saved. We needed to figure out a way to “grow” bone. While bone grafting has come a long way over the years, getting vertical growth of bone with grafting alone isn’t predictable. Therefore, Joan underwent orthodontic treatment. Dr. Brian DeVoe, her orthodontist, was able to change her bone levels by orthodontically moving the front teeth down, therefore, in a sense, “growing bone.” Orthodontic tooth movement also helped straighten Joan’s previously crowded teeth.

When Joan was finished with her orthodontic treatment, Dr. Karl Andreasen, her oral surgeon, bulked up the bone horizontally with a bone graft, before placing implants a few months later. During this interim time, Joan wore both a retainer filled with fake teeth and a temporary implant bridge.

Candy had some difficult decisions to make. Because of the history of trauma to many of her teeth, the teeth were getting more and more unpredictable to save. She had to decide if putting more time, energy, and money into the teeth themselves was going to give her an outcome she would be happy with. Candy originally thought she wanted to save all the teeth that were possible to save. However, after consulting with Dr. DeVoe, an orthodontist, Dr. Dylla, a periodontist, Edgar Jimenez, a dental lab technician, and Dr. Andreasen, an oral surgeon, she and Dr. Elizabeth decided that implants would be a more predictable way to provide the function and esthetics she desired and would likely be a longer-lasting solution, as one of her goals was to “not have to deal with these teeth again.”

Candy worked with Dr. Andreasen first and prepared for the All-On-4 technique in which all of her upper teeth were removed and 4 implants were placed the same day, along with a transitional fixed plastic prosthesis.

While her implants were integrating, Candy elected to undergo Invisalign for her lower teeth to help improve their stability as well. Her Invisalign treatment took 6 months and, in the end, her lower teeth were in a better position as the planning started for her final All-On-4 prosthesis.

What Do They Think Now?

Joan is so happy with her outcome. Her teeth never stop her from smiling anymore. And, as an added bonus, she used to get a headache almost daily, but after her orthodontic treatment, she rarely is affected. Joan told us she knew it would be a lot of effort to get her to her final result, but it was worth it. She told us if she was talking to someone else who was thinking of going through a similar treatment, she would tell them “Do it! Even though it is hard and it takes a lot of effort, even if it’s a pain along the way, it’s worth it, every second of it!”

Candy thought her transitional prosthesis looked ok, but she was excited about the prospect of having complete control over how her final prosthesis would look. She and Dr. Elizabeth had many conversations about what she wanted and all this was conveyed to the lab technicians working on her case. She got to choose the color, the shape, the width, the length, and the arch form of her new smile. It took a couple try-in appointments where the teeth were set in wax and could be adjusted to meet Candy’s ideal specifications, but in the end, the lab was able to provide just what she was asking for.

Candy is happy to be finished with her treatment and says “I am happy with the outcome for sure!” Candy’s treatment took longer than expected due to some minor complications with the tissue surrounding her implants and the need for tissue grafting. Her interim prosthesis held up well though. Candy knew it would be an investment in time and money, but would tell others thinking about going this route “it’s worth it and I’m glad I did it.”