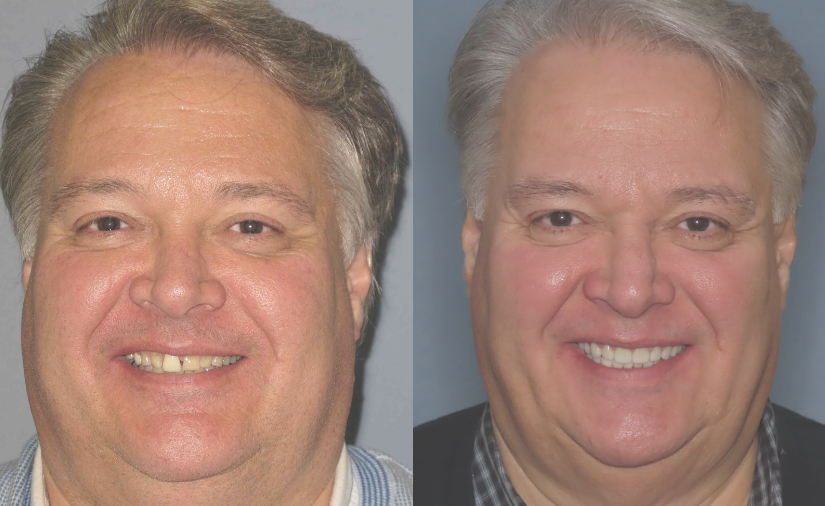 Tom’s journey began in 2014 when he came to us as a new patient looking to improve his oral health and the appearance of his teeth. During his comprehensive exam, Dr. Elizabeth found the main areas of concern to be the excessive wear, erosion and fracturing of Tom’s teeth. Dr. Elizabeth recommended Tom go through the records process (you can learn more about the records process here) and based on the information gathered during that process, she recommended a full-mouth reconstruction to address his uneven bite and rebuild his broken teeth. Throughout the process of reconstruction, it became clear that the amount of force in Tom’s bite was putting too much pressure on even his temporary crowns, which resulted in the temporaries cracking or falling out on more than one occasion. Dr. Elizabeth was concerned that even after completing the full mouth reconstruction, Tom would have underlying issues. Given Tom’s other symptoms, including difficulty breathing through his nose, dry mouth and use of a CPAP machine, Dr. Elizabeth recommended Tom complete the Seattle Protocol to help address his airway patency.

The Seattle Protocol is a six-step process that helps patients with symptoms of sleep-disordered breathing and other conditions determine whether a compromised airway is contributing to their ailments. Each step builds upon the last, but patients don’t necessarily need to complete the entire process as the purpose of the protocol is to determine the phase that provides the best relief of symptoms. You can learn more about the Seattle Protocol and each of the steps here. Throughout the process, Tom noticed improvements in his symptoms such as dry mouth, decreased clenching and grinding, and less waking throughout the night.

What Have Tom’s Results Been?

After completing five of the six steps of the Seattle Protocol, Dr. Elizabeth fabricated a sleep appliance for Tom to continue to improve his airway patency, reduce his bruxism and help him sleep better. Tom has now been using his sleep appliance for over a month and says the results so far have been great! He’s noticed less clenching and jaw pain and experienced an overall improvement in his sleep. Tom said that going through the Seattle Protocol helped him better understand the connection between his sleep and airway issues and he appreciates Dr. Elizabeth’s thorough explanation and care throughout each stage.