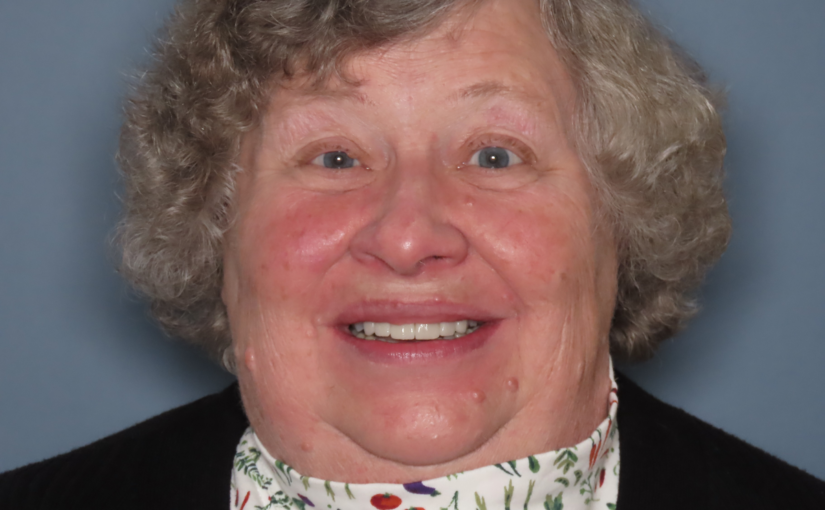 How did this start?

Judy came to her regular 6-month recare appointment and mentioned that she thought one of her front teeth was turning darker.  Joanna, our hygienist, noticed an issue right away as it looked as if Judy may be developing an infection near that upper front tooth.  Joanna took an x-ray and Dr. Elizabeth did some tests and it was evident that Judy had lost a lot of bone near the roots of some upper front teeth. For an unknown reason (likely a trauma that occurred long ago), Judy’s teeth had started dying, creating an infection and bone loss.  Dr. Elizabeth referred Judy to the root canal specialist and Dr. Aguirre confirmed the extent of the damage with a 3-D x-ray.  Dr. Aguirre agreed that the lesion was excessively large.  He was not confident that root canals alone could clear the infection so recommended that Judy work with an oral surgeon to remove the teeth, the infection, place a bone graft, and hopefully implant(s).

Because Judy didn’t remember any past trauma to her teeth and because of the extent of the bone loss could render all traditional treatment options unpredictable, Dr. Elizabeth recommended Judy undergo the records process to determine all her options going forward. 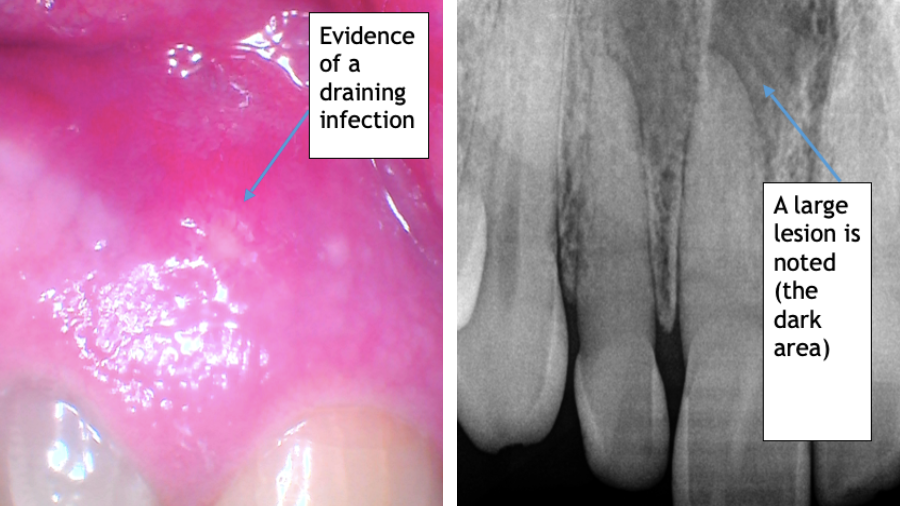 What did Judy want?

Judy wanted to be able to have front teeth and she wanted to be able to predictably clear her infection.  She agreed to go through the records process to learn about her options and hopefully determine if her current bite could be part of the reason for the trauma that caused her infection.  It was also important to Judy to be able to eat and speak normally after her teeth were restored.  She met with Dr. Wade, an oral surgeon, who agreed that two teeth should come out.  He was fairly confident that the infection was confined to only two teeth.  He noted a large bone graft would be needed for Judy and implants would not be able to be placed until the graft was fully integrated.  He recommended Judy have a temporary denture made to replace her teeth for awhile.

At the records appointment, Dr. Elizabeth took photos and x-rays of Judy’s teeth and did a thorough muscle and joint evaluation.  She used the information gathered at that appointment to develop possible treatment options for Judy.  It was evident after the bite analysis of the records process that Judy has an anterior open bite, which means that her upper and lower front teeth don’t meet up with each other.  This concerned Dr. Elizabeth the most because it meant that Judy’s bite may not adjust well to change, but we knew Judy would undergo a change because of the infection.  There was also a risk that her other two front teeth (or possibly more) could eventually become infected so any plan for Judy had to allow for flexibility in the future.  Dr. Elizabeth presented Judy with multiple options, including implant-based options, a tooth-based bridge option, or a long-term removable partial denture.  In the end, Judy’s treatment choice could have been limited by what would be discovered during surgery, but Judy wanted to restore the missing teeth with one implant that would hold two teeth (better for gum esthetics) and she wanted to repair her bite to make her upper and lower front teeth touch.  This would help with long-term functionality and predictability.

Judy had 2 teeth extracted, the infection removed, and a large bone graft placed by Dr. Wade.  Dr. Elizabeth had a temporary partial denture ready to insert after surgery.  In addition, Dr. Elizabeth built up the edges of Judy’s other front teeth to mimic what her final restorations would look like.

Once the bone graft was integrated, Dr. Wade went back for another surgery to place an implant for Judy.  One implant was placed that would eventually hold and replace two teeth.  After three additional months of healing, Dr. Wade placed a customized healing abutment to help shape the tissue for the eventual tooth restorations.  Judy continued to wear her temporary partial denture during this time.  Dr. Elizabeth also wanted to influence the tissue at the site for her “other tooth” so she built up Judy’s temporary partial denture to put pressure on the tissue and shape it so it would eventually look like a tooth is emerging from the tissue. 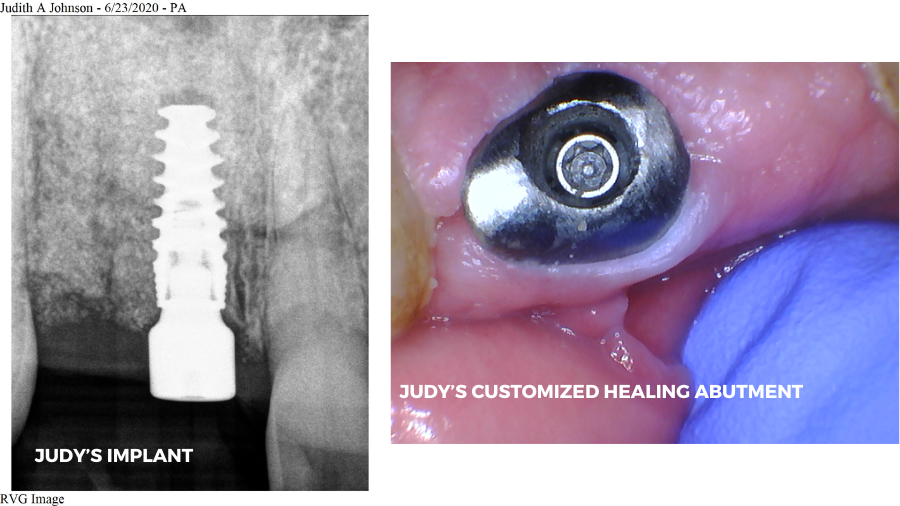 During the healing time, Judy also decided she wanted to lighten the color of her teeth so she underwent the Zoom bleaching procedure and improved her shade to 5 times brighter!  Finally, Judy did the final planning with Dr. Elizabeth, completing a lab wax-up, like a blue print, for her future restorations.  When the surgeon gave the “all-clear,” Dr. Elizabeth prepared Judy’s remaining upper front teeth and got impressions of the implant site so 5 restorations could be fabricated for her 6 front teeth.

What does Judy think?

Judy had a long treatment process.  She notes she learned a lot as a lot went into the decision making.  Judy notes “I didn’t have a choice, it was something that had to be done.  It was interesting to learn more about my bite and what it would mean to have longer teeth in the end.”

Judy notes she thinks her teeth look “very nice” and is happy to be done with everything.  “It was a bigger procedure than I expected, but it turned out nice in the end!”

We’re so grateful to have you as a patient, Judy – thank you for putting your trust in us!  It was a pleasure to be able to use our creative thinking skills to help you through this interesting case.