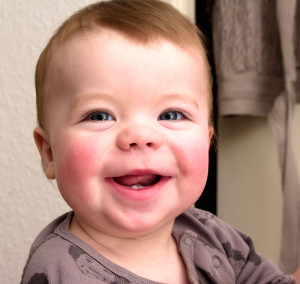 Did you know that children are also at risk of developing gingivitis, an inflammation of the gums?

If you’re caring for an infant, with or without teeth, it may seem like you can wait on oral care. But that’s not so! It’s equally important to start taking charge of your child’s oral health before teeth appear.

A toothbrush isn’t required, just a washcloth and some tender loving care.

Wiping the gums will remove bacteria, food debris, and sometimes yeast. It is a good habit to practice doing this at least twice per day.

Your baby’s teeth will generally begin to appear between four and seven months during a process called teething. Teething can make babies feel uncomfortable and fussy. Teething is usually completed before your child’s third birthday, but in the meantime, this period can be difficult on both you and your baby!

To help relieve discomfort, you can try these methods:

If your baby has a fever, or is unusually irritable or inconsolable, call your pediatrician.

We all want what’s best for our children. By following these simple steps, you can transition easier from gums to teeth.