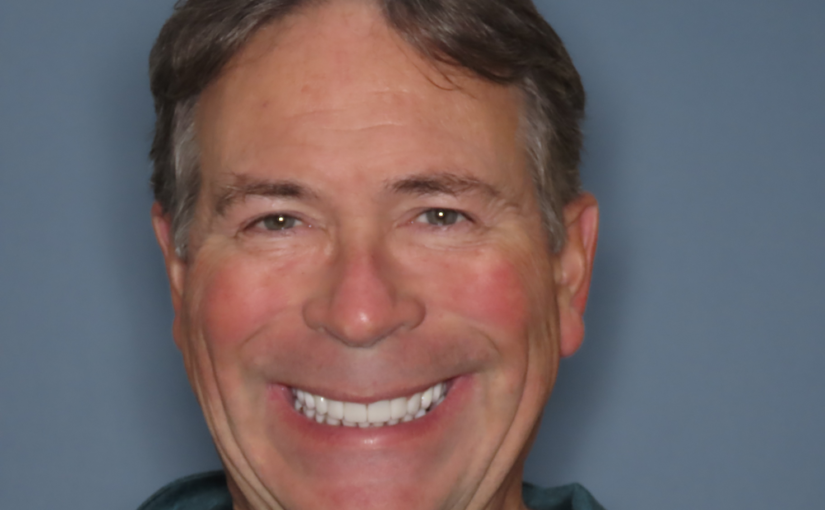 How Did this Start?

Mike had been a long-term patient of Dr. Furey when Dr. Elizabeth took over his care in 2016. Up to that point, Mike had talked with Dr. Furey about the need to restore his mouth due to the severe erosion that was occurring throughout. Starting in 2016, his canines were starting to decay in addition to the erosion weakening the tooth structure. Mike was also starting to have pain on a lower left tooth due to an infection in his tooth. Mike’s case had a lot involved because we were not only dealing with erosion, but his bite and jaw anatomy have likely been contributing to the erosion on his teeth. This meant that the most predictable way to restore him back to health would involve jaw surgery and restoring all his teeth.

Mike had long been functioning with a deep bite meaning that his tongue and airway were working with space restrictions. It is thought that oftentimes deep bites will increase acid production in the mouth and be a source for erosion. Mike had previously been diagnosed with sleep apnea and had been using a CPAP machine for many years. Sleep apnea is often caused, at least in part, by a restricted airway.

What Did Mike Want?

Mike stated his goals for his teeth were “that they work and I don’t lose them.” He was noticing jagged edges and that his upper canines were especially worn. He thought the wear was due to the fact that he caught himself grinding his teeth during the day and night. He didn’t realize that the erosion may be part of a larger whole health issue. Mike had many options to consider and while he understood that jaw surgery may be the best way to improve his overall airway, in the end he decided against surgery. This meant that Mike needed to open up his deep bite and complete restorations on all of his teeth.

In order to open up Mike’s bite, a laboratory wax-up was completed. This helped create a “blueprint” of how the teeth would look with the new restorations. After Mike approved the wax-up, he started by getting his infected tooth extracted. This allowed some time for healing before an implant was placed in that same area. Mike’s progress was slowed up somewhat due to complications he had with his heart and having to undergo surgery, as well as the COVID shut-down, however, after 4 years, Mike was finally on his way to protecting his teeth with new restorations.

All of his teeth were worked on and prepared for crowns or veneers. Mike underwent preparations of the upper teeth one day and of the lower teeth another day. He spent time in temporary crowns and had to start getting used to his new bite. At first, he said “it feels kind of like a mouth full of marbles.” But, then as his muscle adjusted, he thought his bite felt good.

What Does Mike Think?

Before he started his treatment Mike stated he was “apprehensive about it.” The work in general made him apprehensive. It was a big decision, but he understood that his teeth were at severe risk if nothing was done. He did not want to “lose all those teeth.” Mike reports now he is “very happy with the results and I like them a lot!” He likes having the smooth surfaces of his new crowns rather than the rough, sharp edges from the erosive wear pattern on his natural teeth. He admits that he wishes he would have done the work sooner and that it hadn’t taken him so long to make a decision. If talking to someone considering getting this type of treatment done, he would tell them to “do it sooner than later. Be patient and follow the recommendations given by Dr. Elizabeth.”

Mike’s final results are an improvement in that he doesn’t have such a deep and restricted bite and the enamel that was eroded away has been replaced by strong porcelain. Unfortunately, without undergoing jaw surgery, Mike’s teeth will still be at risk due to jaw movements Mike makes to keep his airway more patent. Mike will still have to maintain his treatments for sleep apnea and he will likely still have dental work to do in the future should his teeth break down the road. Mike’s case is a good example of why we like to take time with kids and teenagers, making sure they are developing adequate room in the mouth for a good airway and skeletal structures, trying to prevent compromise before it occurs!